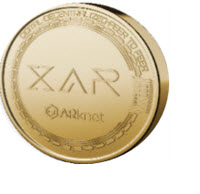 THE XAR AND THE ESSENCE OF CURRENCY

XAR is the name we have given our crypto currency, the crypto money that we have coded up to power the digital economy in the Company's ARknet Platform. Just a few years ago, the very thought of coding a digital currency was unheard of and would have been regarded as a rogue currency and preposterous. But today, almost everyone has come to appreciate that digital currencies are real and have enormously powerful properties. What is this all about anyway?

I became acquainted with the power of a rogue currency in the second grade. It was all about milk bottle lids. The boys in the second grade at Lincoln Elementary had developed a roaring economy using the stiff paper pull-top lids of milk bottles. Those were the hard, thick paper tops that fit snugly inside the milk bottle opening, perfectly captured by two beautiful, smooth circular facets in the glass top. The built-in pull tab in the lid meant you could pull and replace the lid multiple times, if needed, before the bottle was emptied. These lids weren't pry-off caps like caps on beer bottles that come off bent up and misshaped. Oh no. While they were as common as cigarette butts, there was a difference. They were flat, perfectly round, about the size of a silver dollar and they looked like money. They were durable and transportable, tougher than your Batman coder ring, and you could carry them around in your pocket.

Moreover, somebody's mother had to buy a bottle of milk to get one. For a second grader, that was a built-in cost of ownership. A second grader had no way to forge fake milk bottle caps. They were like gold. And we acted as if they were gold. We hoarded them, gambled with them, gamed with them and bought favors with them. It was real second grade currency, far more valuable than the nickel Mom gave you to buy a government beverage at school.

In his Bitcoin 2021 talk on the history of money, Nick Szabo discusses money from its earliest use in the Danube Valley near the western bank of the Black Sea until today, and identifies the three indispensable features of any money:

A currency doesn't have to do anything else to work as money. These three features in a currency enables the currency to provide an extremely valuable service in and of itself.

Which brings me to our present use of the XAR token as a crypto currency. The Arknet Platform is an economic ecosystem whose community consists of the users of the Platform who interact with each other and conduct business on the Platform. The currency, that is its money of the ecosystem, is the XAR cryptocurrency.

The upper limit for milk bottle cap money is what can be done by little boys in the second grade. But XAR money is the currency that makes transactions happen between consumers and providers in what can be a global economy. The only limit there is the world's GDP, now approaching $100 trillion.

We believe the use of our own coded digital currency is the best and most straightforward way to achieve and maintain active commerce in the new arena of products and trade developing around the technology of augmented reality. We believe that the XAR currency will be a store of value in the fast-moving augmented reality world. It will be hoarded like gold by those who have it. We also believe that the XAR will prove to be the safest and fastest way to execute buying and selling transactions in AR.

As for the three features of money, the XAR currency has them all:

XAR achieves what money must achieve, and it will be the beating heart of the Arknet AR ecosystem.